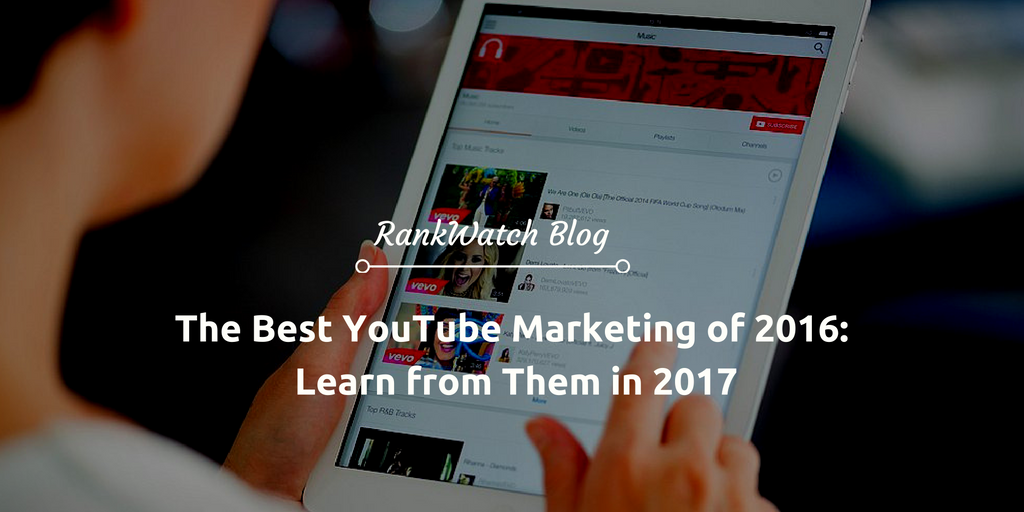 I’m going to look at five different YouTube marketing campaigns from last year. Each one is going to highlight something slightly different than the other, offering you a wide range of learning opportunities. One thing you will notice is that there are videos out there with more views, but that’s not the be-all and end-all of YouTube marketing. 2017 promises to be an exceptional year in video marketing. As it continues to expand, you had better be ready.

No one forgets the incredible viral mobile game Pokémon Go from 2016. But way too many people forget the incredible hashtag campaign, YouTube marketing, and offline marketing which launched the game well before its release. The video was originally uploaded to YouTube first, but it got a huge push when it debuted during the Super Bowl:

For people like me, who grew up with Pokémon, you couldn’t help but watch it with wide eyes. The entire video is a primer for what was to come with the mobile game.

Okay, a viral marketing video with a crossover on the Super Bowl. That is almost a surefire hit. What really drove it over the top was their hashtag marketing campaign. They had built it into their YouTube marketing with the use of #Pokémon20 in the title, and they continued to push it hard all year long:

Thanks for celebrating Pokémon Day with us, Trainers! Here’s to 20 more years! https://t.co/ttaljSstO1 #Pokemon20 pic.twitter.com/J2h5uXNgo2

A lot of Trainers shared their Pokémon stories with us this year! Share yours with #Pokemon20! https://t.co/sV9QBtGfC2 pic.twitter.com/Vk81OB9s8G

The dedicated Pokémon 20 website, filled up with images from #Pokémon20 on Instagram, was another big part of what made this such a successful YouTube marketing campaign. I’m sure that they would have seen a huge spike in their Google Analytics if they monitored it before and after the video launched.

For some, it may have seemed like Pokémon Go was a viral marketing hit that came out of nowhere. But as you can see from above, that is simply not the case. The entire Pokémon marketing team had a hand in its success, and an incredible video on YouTube is what launched it all.

Full disclosure; this is not my favorite advertisement at all. I found these ads to be tedious, but I’m going to have to put my personal preferences to the side and realize that this is the top YouTube ad in terms of views for the year. 102 million views on anything simply can not be ignored.

The game has been quite successful, with App Annie ranking it as the sixth top grossing app of the year. The game also claims to be the world’s largest MMO. With all of the other videos here putting such a focus on brand recognition and viral marketing, Mobile Strike’s ability to bring in money helps remind you that all of this matters. And it matters to your bottom line.
An interesting thing to note is just how poor their website is. It is a single page with buttons to click which send you to the App Store, the Android Marketplace, or Amazon. Below that you will see a video that you can watch, and that is it.

Perhaps this shows that a mobile app can succeed with great videos alone, but if I were you I would not get lazy with my website.

The game has had a number of other YouTube advertisements that crossover onto television. This was the most surprising trend of 2016 for me. The YouTube audience is no longer such a separate entity from the television audience. They are blending together, and larger brands are taking advantage of this. There’s no reason at all that a larger brand cannot also take advantage of it.

Cristiano Ronaldo has a case of The Switch

All of the examples above were very conventional advertisements.They are all around a minute long, and resemble many other advertisements. All that’s really different is that they made them highly entertaining, and put it on YouTube.

The Switch, from Nike Football, however, is the future of branded content. This 5-minute long video is much more like a short film than an advertisement.

The branding on it is very casual, they don’t stick the logo in your face all the time, and it’s much more important to them to tell this story than to market to you.

This is the future of online video for brands. Consumers are getting more and more impatient with traditional advertising. We’ve been seeing it all of our lives, and we are now looking for content which adds more value.

Yes, there are videos out there from brands that got more views than this one. But none of them created a cultural shift quite like this one. Always has been doing the #likeagirl campaign for some time now with various videos. And they had another great one this past year:

The success of this video was not on YouTube alone. The integration of a hashtag marketing campaign, by putting the hashtag right in the title, lead to considerable success on Twitter as well.

Top 30 Women In #SocialMedia Who Are Rocking It #LikeAGirl: https://t.co/GORvU780Ed pic.twitter.com/EmW5Is4xHO

Hundreds, perhaps thousands, of girls and women tweeted out content related to the #LikeaGirl hashtag. If you’re not looking to do cross-platform marketing with your YouTube marketing you’re setting yourself up for failure. YouTube should never exist alone on an island, it must be integrated with at least one other social platform. Always showed us a very easy way to do this.

Mountain Dew has a Puppymonkeybaby

I am not entirely certain what the appeal of this YouTube ad was. Perhaps people enjoyed being slightly horrified by a puppy head on a monkey’s body on a baby’s legs. All I know for certain is that I was slightly horrified, and enjoyed it only a little bit. I certainly remembered it, I will admit that.

The actual YouTube video itself only garnered around 27 million views. But this is another instance of a YouTube video being used as content for other social platforms. They turned #puppymonkeybaby into a hashtag and shared it on Twitter quite often after the video launched:

Got #puppymonkeybaby in your head? Let it out. Get Dubsmash and start your party. pic.twitter.com/xmC5muvqNG

I’m not sure if it was intentional or not, but puppy monkey baby has become a very common phrase around the Internet lately as well. I suppose you could look at it as sustainable viral marketing:

At the end of the day, you have to say that this was a success. You can be sure that one of the first things they wanted was to be memorable, and they have clearly succeeded with people tweeting about their own “puppymonkeybabies” months later. They also successfully conveyed the entire point of the puppy monkey baby, which is that their newest flavor combined three great things.

As 2016 showed, as well as this article, there are many ways to have a successful YouTube marketing campaign. The diverse number of examples above are a testament to this:

As you start making plans for your YouTube marketing in 2017, take a look at these five examples to see the wide range of possibilities. Was there any exceptional YouTube marketing you saw in 2016 that you think we should be aware of? Comment below and let’s talk about it.

Matthew is the social media marketing writer on Devumi.com. You can learn more about Devumi by visiting his blog every Friday for his latest posts about all things video marketing and social media. For your Twittering needs, check out @Devumi for updates all day long on the latest Internet marketing developments.

Yes, I remember few of these popular YouTube ads of 2016. By the way, I had a great time reading this article.

The 5 Groundbreaking Video Trends to Watch Out for 2020

The ever-growing craze in video marketing keeps evolving. With millions of videos uploaded to the internet every second, there are...

6 Powerful Reasons to Use Video Marketing for Greater Success

Every marketing strategy, such as paid advertisement and hiring influencers has an outcome. It fails. It is in the inconclusive...

Although YouTube is the second largest search engine, it still remains an untapped source of generating substantial traffic. Also, with...

Skyrocket your Traffic with Video Marketing

Video Marketing is big these days, and there are good predictions about it. Even before the onset of fast bandwidths...